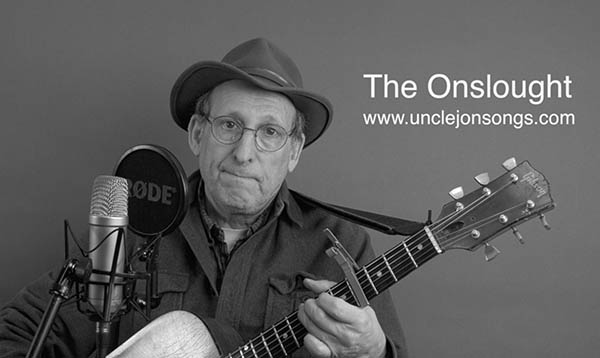 It was requested that I try doing a song about the COVID19 pendemic and this is what came out.

I started thinking about the various sort of people whose lives are being turned upside down and wrote about them.

But after that I realized I needed to remind myself and others that we will get through this, most of us.

It has been correctly pointed out that I spelled onslaught wrong in both the lyrics and in the video. I tried to see if "onslought" is an acceptable alternative... but it's not.

Ruby is a joyful singer,
Her career was going well,
Now her gigs have all been cancelled,
How she gonna pay her bills?

Jack’s a wrestler, he’s a champion,
His training is olympic timed,
Now that dream might never happen
Sees his lifelong dream unwind.

CHORUS
We all had plans and work to do
When the onslaught came along,
Now every single dream is wilted,
Every life is now disrupted,
And the only thing we know for sure
It’s gonna be a long road back.

It’s gonna be a long road back.
Through floods under stormy weather,
But the onslaught is not gonna win.
We will put our world back together.

Stan is rich and owns a business,
But the company’s all shut down,
Stan’s got money, but he worries,
Is he broke and bankrupt bound?

Jackie’s job was in construction,
But the job site closed for now,
Stuck at home and going crazy,
This will end but he doesn’t know how.

Maria cleans up at the motel
But the motel is closed up tight
Now she deals with both her children
Going hungry every night.

Christine’s a nurse and working extra,
Caring for the sick and dying,
She’s seen things you never want to,
Parents sick and children crying.