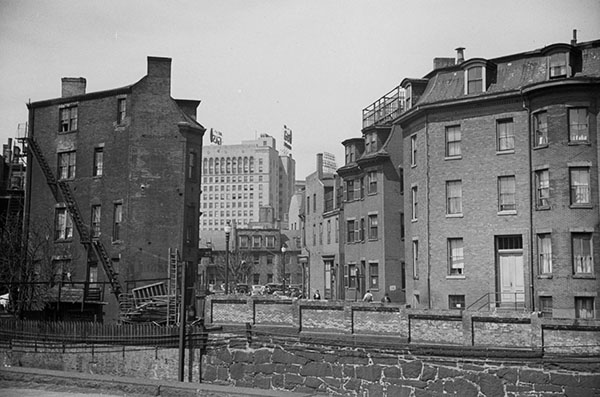 The photo is from the Library of Congress. I don't know if it even Boston, but it reminds me of the treeless hardness of Charlestown when I lived there in 1971.

I was nothing more than holes strung together,
She was building dreams made of pigeon feathers,
And into our lives, right off the streets,
Walks a big smiling kid named Jerry.

And Jerry takes charge of the radio,
Changes it over to all top 40,
Jerry sings along as the levee runs dry,
And Brandi she’s a fine girl.

We got grown up friends come over for dinner,
We tell Jerry you gotta leave us now,
Then rocks come banging up against the door,
Then Jerry walks off to a lonely home.

Very next day Jerry is back,
Changing up the station on the radio,
Ragged little part time family,
Back together again.

Jerry comes one day and he tells us that,
His Uncle Chester has been killed by the mob,
He doesn’t bother with the radio now,
Revenge is his only song.

Now Jerry doesn’t come to see us,
The two of us we’re too alone,
It falls apart in silent sadness,
That’s the end of our little home.